Question: “I hardly use any salt… how can I still have high blood pressure?”

"I hardly eat processed, packaged or instant food, do not put salt in my food myself and yet my blood pressure stays on the high side ... how is that possible?".

We often get questions about salt: how unhealthy is it? How do I make food tasty without salt? Why do I like it so much?
People are often flapping with their ears when we explain that their high blood pressure may have more to do with how stressed they are than with the salt on their food. That you can eat too little salt and that salt deficiency ... is stressful for your body!

Be sure to read the entire blog before you empty the salt barrel on your plate!


Too much salt is unhealthy ... is a message that we all learn. At a family party where Naomi shook some salt on her food, she was even addressed by her cousin of 6 years old: "That is unhealthy". So we learn that so early on... but is it true?

No, salt is not unhealthy!
Too much but also too little salt is unhealthy.

That is a difficult message for many people because black-and-white thinking is much easier. That is why people stop adding salt to their food altogether, for example, when they have been told that they should eat less salt. What they do not know is that a salt deficit is also unhealthy ... maybe even less healthy!

What is too much?

We get a lot of information about salt, especially that we get too much of it ... the first question that arises is: what is too much? And, of course, opinions differ! In the Netherlands, the average person eats 8.5 grams of salt per day and according to various campaigns, this should be reduced to less than 6 grams. In America, the heart association even advises less: 3750 mg, slightly less than 4 grams. The underlying tone is: how low can you go.
That is not true!

This research on salt is done on people who are, for example, overweight, insulin resistance, chronic low-grade inflamed, have metabolic syndrome and consequently a higher risk of cardiovascular disease. These people with all these ailments usually react 'more sensitive' to salt, because of those underlying problems. This means that they benefit from an optimal amount of salt in their food. Note: even that is not 0!

But the guidelines for those sick people are now recommended in education for healthy people, without high blood pressure. And that is not only unnecessary but perhaps even harmful. Scientific research into mortality and salt ... gives a different picture than the "how low can you go" from the information!

The mortality probability appears to be the smallest when eating between 4 and 6 grams of sodium per day. Kitchen salt consists of roughly 40% sodium ... so you come to about 8.5 grams of kitchen salt. Hey, that's what the average Dutch person eats ... that amount of salt is not the problem for healthy people ... (but it can still improve! So read on ...)
What is more striking is that in people with high blood pressure the mortality rate shoots up again when they eat more salt ... but in people with normal blood pressure, it barely rises. For them, a little more salt actually doesn't make a health gain ...

Also striking: when you are (far) left from the optimal salt intake (below 3 grams per day), the mortality probability is high in both groups. And on that topic, you never hear anyone speak! Even a child of 6 years old has been given the message 'salt is bad' ... while: no salt is bad is also evenly true!

The problem with this type of blog is always that the human body is so ingenious and complex, that it can not be reduced to the effect of one specific substance. This is the whole salt discussion about sodium because sodium is in common salt.

More minerals are important for the functioning of our body. Potassium, calcium, and magnesium also play a role in this salt story. Because it often concerns the balance between one substance and the other. I'll try to explain it in an easy way(and the numbers are not the actual numbers, this is only to make it understandable!):
Suppose the ratio between sodium and potassium should be 1: 1. We get enough (or even too much) sodium, via table salt and processed food, packages, bags, chips, biscuits, bread.

As a result, that ratio becomes, for example, 2: 1.
The next problem is that we barely get potassium in through our food because we would have to get it from a lot of fresh vegetables. Making the balance 2: ½. Which is 4: 1. 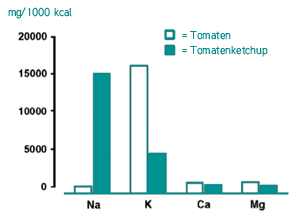 If that sounds unhealthy in your ears, then you are right.

You also see that by processing food that balance in minerals changes (see picture). For example, tomatoes contain more potassium than sodium. But when we make ketchup ... the amount of sodium rises and the amount of potassium decreases. Ketchup contains much more sodium and almost no potassium. See here: the problem with processed foods. The balance is gone. Especially if you think you can boost your amount of vegetables with a blob of ketchup (and those people exist). Then you go in terms of minerals properly up sh*t creek ... Add the average Dutchman gets 80% of his salt from those processed products and thus minerals get in the wrong proportion.

This is, of course, a less easy message to explain than: how low can you go.

And the fact that in our body it is also the case that the blood pressure-boosting effect of sodium hits extra when you have very little potassium in your system ... then you see why the problem is so great.

About the relationship between sodium, potassium, calcium, and magnesium I can also talk for hours, but what it comes down to in short is that our diet (and dietary supplements) are relatively high in sodium and calcium and low in potassium and magnesium. That puzzle cannot be solved by leaving the jar of salt in the cupboard.

High blood pressure has more cause than just salt!

People like to make things simple, but sometimes we simplify too much. Many people think that their high blood pressure mainly (or even only) is caused solely by too much salt and try to solve it with less, less, less salt.

High blood pressure is often caused by a sum of things: a lifestyle. Salt, mainly from processed food, is part of that sum. Salt to optimal (and not to 0) is part of the solution. Not THE solution.

A different lifestyle is a solution here, both for the underlying causes and for the health problems that are also caused by high blood pressure.

Maybe you are dizzy now, from information overload.

Maybe you now think: from now on I only eat fresh tomatoes, without salt!

Perhaps you are considering figuring out of everything you eat, how much sodium, potassium, magnesium it contains... STOP! That too is stressful!
However difficult the problem may seem, the solution is actually very simple. Maybe even simpler than cooking from a package: Stop all those ready-made products. (I would even say: stop eating all that bread).

Go eat real food again. Especially a lot of fresh vegetables, lots of different vegetables. We eat vegetables with every meal and arrive at around 750 grams up to one kilo a day (including things like (sweet) potatoes). This not only affects the minerals you receive but also improves a lot of the underlying causes of high blood pressure through better eating.

Many and varied vegetables, that way you get more different minerals ... and you can even season your food with some salt. Believe me, we have tried it, but we are not able to get over that optimal amount per day ... because on real food you taste that salt and you do not really take too much.