I feel free and confident ever since I let go of the idea that I ‘should be at a certain weight’. The idea that everything would be perfect (or okay or just easier) when the scale would stop at a certain number.
It’s an idea that is planted in many of our minds at a very early age, a billion dollars industry is built around this idea… and my vision for my work at HealthCreators is to tear that idea down!
I want to rid the world of the diet mindset… and that vision started when the Bridget Jones books were made into movies (that is why I recreated the movie poster in the picture above)

When the Bridget Jones books were published in the mid-90s, I devoured them.
For me it was all very familiar and  recognizable, especially at that time:
I studied journalism and lived in a student house.
I often drank too much and then did stupid things.
I found a 2-person bag of pasta with instant sauce and a whole block of cheap blue cheese

a great meal for 1 person: I could finish that easily.
I trained at times (alternating with longer periods of doing ab-so-lu-te-ly nothing).
I fluttered from relationship to relationship.
I regularly committed painful blunders, preferably as publicly as possible. On TV, for example (although that took till early 2000’s).
My best friend sometimes sighed that if I had kept a real diary, Bridget Jones would have nothing on me.

Miserable about my weight

There was another similarity between me and Bridget: we were both very busy with (and very miserable about) our weight … while looking back was not necessary at all. Okay, I don’t and didn’t look like I could be on the cover of Women’s Health anytime soon… but it is no coincidence that that was the standard in my head. That is just a very visible expression of the diet culture and my own diet mindset.
We are surrounded by diet culture, we breathe it in like it is oxygen throughout the day. It is estimated that you come across between 500 and 5000 advertisements per day (and we are not even talking about the people you follow on social media). We are presented with an ideal image in most of those advertisements. The ideal image for women is young, tall, slim, perfect skin… white, often blonde.

So, then my favorite books were made into ROMCOM-movies and the American Hollywood actress Renee Zellweger was cast as the British Bridget. I admit immediately: she is hilarious in the role! But it also surprised me … especially when I read that she had to gain somewhere between 20 to 30 pounds to portrait Bridget.
By then I had also grown up a bit more and developed a little further and had made an observation: I was not at all overweight or fat in the periods that I had been so unhappy with and fixed on my weight! When I see pictures from then, I really don’t understand why I didn’t realize that. My philosophy was, therefore, that Bridget did not have to be overweight at all … even with her it was in her head. And could that not have been beautifully displayed by a Hollywood actress? That it is in all your head, that it is your diet mindset that makes you insecure and unhappy. But no, Renee stopped exercising and stuffed herself full of junk food … to look like me. That is what the ‘ideal picture of dietary culture’ must do to look like me. Ough!

For the record: even with the extra kilos, Bridget / Renee looks normal. That is why it was quite confronting that Zellweger adjusted her weight for the premiere and the red carpet again. Funny story: at the Dutch premiere of the second Bridget Jones film I asked her this question during a press conference (which I covered for EditieNL). Renee Zellweger did not really understand what I was talking about, emphasizing that Bridget had a normal weight, that no male actor ever gets questions when he gains pounds for a role. She literally did not understand that my question was not about her … but about Bridget … and about me!

Wake up call for millions of women

My question was about the fact that a majority of women, even models, especially models… are insecure about their appearance, in a Bridget Jones-style…
The movie could have been an excellent opportunity to let the picture of what Bridget look like and the thoughts she had about it,  be a total mismatch.
When a Hollywood star that looks like a Hollywood star, as the embodiment of dietary culture, would have the same thoughts and behaviors in a movie as I do...
That the silver screen would show me how an actress without extra weight, would have all those thoughts about having to lose weight to be worth it, to be good enough …
That it doesn’t matter what you look like, what you weigh, what size you are… that you can still have those thoughts.
The realization that losing kilos is not the solution for that recognizable, typical Bridget Jones mix of feelings that swing back and forth between ‘I am amazing’ and ‘I am the most worthless person on earth “… What could be a wake-up call for millions of women!

And maybe that is precisely why it didn’t happen.

Diet culture is everywhere. It influences what the words that come out of our mouths, how we exercise, what we eat, what we wear and even how we think, feel and what we say to ourselves! We are in it every day, and despite that … a lot of people don’t realize that this is the case. It is completely normal to us…
What it is? It is the system of beliefs and values about body weight, shape, size and: about health and well-being.
It is the standard that we hold to each other and ourselves to.
The value that we attach to being slim is a result of the diet culture.
The idea that some kinds of training are for certain people: strength for men and cardio for women, is a consequence of the diet culture.
The focus is on the appearance, not on how you feel or your inner goals. For example, I have never received as many compliments as when, some 15 years ago, I lived for weeks on end on espresso and carrots. I had become super slim … but I was also a trembling heap of misery that had to cry all the time. That’s why almost everyone has a ‘weightloss-goal’ … whether it’s 40 pounds or those ‘stubborn last pounds’.

You do not have to be on a diet, to have a diet mindset

And even if you don’t have a ‘weightloss goal’ (not even covertly), you probably have or recognize elements of the diet culture. The way we talk about food: “I actually didn’t deserve that piece of cake, because I didn’t exercise today” … or something like that. Even the famous ‘balance day’ is an example of this.
If you’ve ever felt guilty about something you’ve eaten, it’s because we are steeped in diet culture and diet mindset.
Or when you’ve run an extra round because you’ve ate all the chocolate mousse … diet culture!
When you say the following sentence to someone you haven’t seen for a while on the autopilot: “You look good ! Have you lost weight? “… diet culture! (And that sentence comes from my mouth more often than I like … followed by an extensive excuse, but still).
And … we all pay a price for the diet culture, because many of us force ourselves to spent money, time and to focus attention on something we don’t like at all: such as weird crash diets and hours spent on cross trainers in the gym, just to burn the calories.

Where do we start to change? Tips!

That you have read all the way to here is hopeful. Thank you. Here are some tips for action to become more aware of the diet culture, your own diet mindset, and what you can do about it:

Stepping out of the diet culture and your own diet mindset sounds pretty simple, but I promise you: it is quite hard because you will be surprised how deep it is rooted in you! I, too, regularly catch thoughts and statements from the diet culture in my head and out loud… How to correct: feel your feelings about it, learn a lesson if necessary and move on. Keep focusing on why this is important to you … and take the next step.

Do the Whole30 with coaching by HealthCreators

Focus on your health, your habits and your relationship with food. Changing your life starts on your plate! 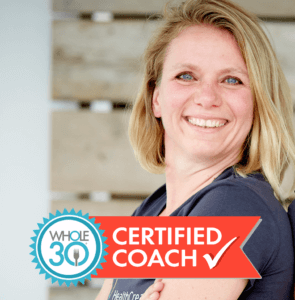 To the Whole30 site